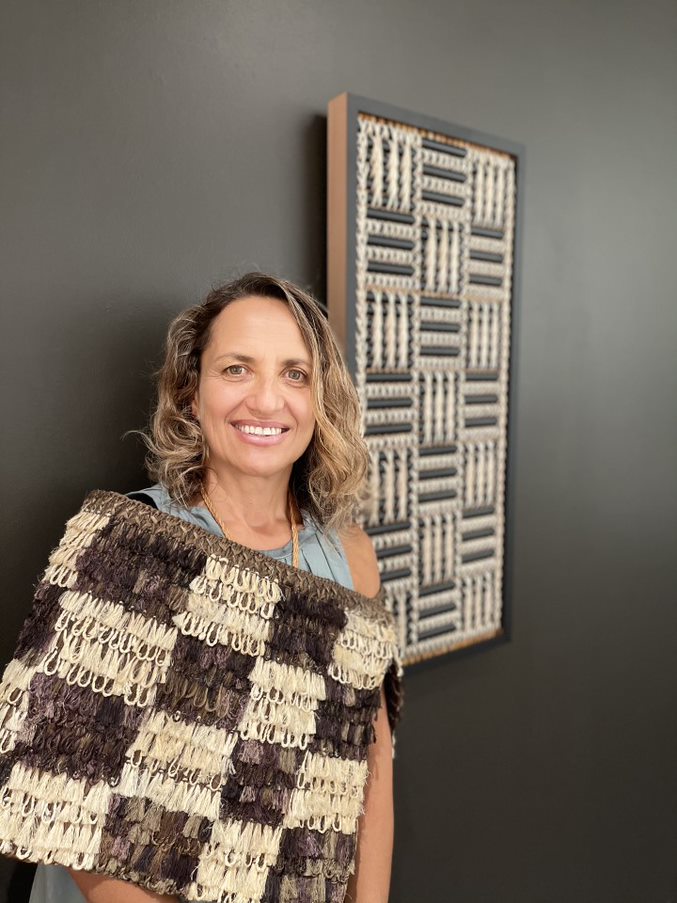 Kohai attributes her interest in Māori art beginning as a young child, travelling with her parents and six siblings to the annual Māori Artist and Writers hui held at different marae around the Motu in the the 1970’s – 80’s.  There she found herself captivated by the arts of the wharenui; from her bed, looking up at the kōwhaiwhai in the ceiling and around the walls at the tukutuku and whakairo; she says ‘it kept my eyes occupied while the artists talked’.

At these same hui, Kohai also found her eyes stimulated by the paintings exhibited there by some of our leading Māori visual artists, one of them being Darcy Nicholas.

“I remember as a small child looking up at his paintings in awe, but kind of scared seeing those faces in the clouds”

Also in 1986, Kohai assisted with an artwork called ‘Taranga’, her job was to plait Taranga’s hair, made of harakeke, to feature in ‘Karanga, Karanga’ at the City Gallery, Wellington; a ground-breaking exhibition, known as being the first exhibition of work by wāhine Māori artists.

As a 20 year-old and beginner weaver, Kohai is still proud to this day for her involvement.

Kohai’s first introduction to muka and cloak making was during her degree study at Te Wānanga-o-Raukawa 1994-1997 under the tutelage of Erenora Puketapu-Hetet.  Then in 2001, Kohai made her first korowai that was started through attending a series of cloak making wānanga with Kahu Te Kanawa at Orakei Marae, Auckland.

Kohai’s first solo exhibition was in 2007 titled ‘Tūkākahumai – garments stand forth’, a series of ‘black on black kākahu’ that encapsulated her research, exploration, and ‘obsession’ with muka and whatu woven forms within her Master of Māori Visual Arts study, completed in 2008.

Presently Kohai has turned her attention to tukutuku. She enjoys a project that stimulates and challenges the mind whether it be in its form, ‘story to design’ or use of materials, and celebrates its relevance and value not only confined to the wharenui, but for public display and in private homes, and says ‘ there is always a story to tell’.

Kohai is currently working on two large tukutuku artworks for display in Porirua, being her iwi rohe of Ngāti Toa Rangatira; one panel acknowledges and reminds us that we also have chiefly tūpuna wāhine to celebrate, and the other ‘a flag’ commemorating Ngāti Toa Rangatira signatories to TeTiriti o Waitangi.